Grim Reaper – Walking In The Shadows 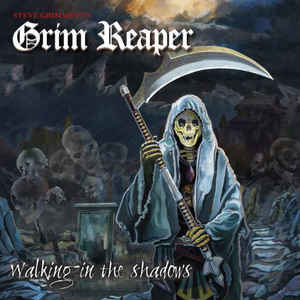 “Walking In The Shadows” is GRIM REAPER‘s first new recording since 1987’s “Rock You To Hell”.

Grimmett stated about the effort: “I am tremendously proud of the album. It has taken a long time because it has been fraught with problems, but we have ended up with the best thing I have done in decades. We’re all looking forward to bring it to the fans and excited to be doing a world tour, starting straight after its release, and carrying on until 2017.”

Surrounding himself with an all-new band, Grimmett recently completed a 22-date North American tour. The trek included stops in New York, Philadelphia, Detroit, Chicago, Milwaukee, Seattle, Los Angeles, San Antonio, and Austin. Due to its success, the band recently announced a planned return in the autumn to support the new album after release.

Original Article Can Be Found at:  http://www.blabbermouth.net/news/steve-grimmetts-grim-reaper-walking-in-the-shadows-album-details-revealed/#r3E4eDR3Z5WbZszT.99