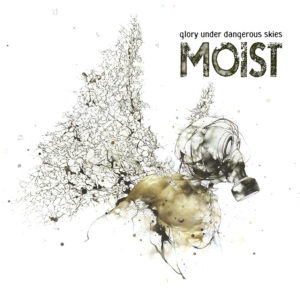 Glory Under Dangerous Skies, originally titled Moist IV, is a 2014 studio album released by the Canadian alternative rock band Moist on October 7, 2014 through Universal Music Canada.[1][2] The album is Moist’s first studio offering since their 1999 album Mercedes 5 and Dime, and the first album to feature new members Jonathan Gallivan (on guitars and backing vocals), Louis Lalancette (on bass), and Francis Fillion (on drums). Original drummer Paul Wilcox had left the band just before its lengthy hiatus in 2000,[3] and bassist Jeff Pearce left in early 2014 during the production of Glory Under Dangerous Skies.[4]

The album was produced by original band guitarist Mark Makoway, and recorded over several months during the winter of 2013–2014. A nationwide tour to promote and celebrate the album occurred in late 2014.[1][5] Said lead vocalist David Usher of the album, “It feels very natural doing this with the band again and everything has just fallen into place. We’re really excited about the new music and the amazing reception we’ve had.”[1]