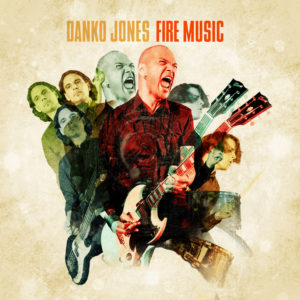 Unabashed rock ‘n’ roll lifer Danko Jones has, over the course of the past 15 years, stayed true to his twin muses: Misfits’ aggression and Thin Lizzy riffs (with some badass loverman attitude thrown in for good measure). Silly, to be sure, but Jones’ unwavering belief in the power of rock and roll is what has put his shtick over throughout all of his seven albums. To Jones, RNFNR, as practiced by him, is never broken, so it never needs fixing, and he charges through Fire Music’s 11 tracks with unerring sonic confidence.

Sure, clichés abound (“Too much is never enough,” he notes on opener “Wild Woman”) and he still hasn’t met a rhyming couplet he didn’t like (“Gonna line up all my enemies, tell them what they did to me,” he seethes on the threatening “Body Bags”). Meanwhile, enemies are smote (“Watch You Slide”), asses are kicked (“Gonna Be a Fight Tonight” – violence is a fait accompli in Jones’ world), women are worshipped (“Live Forever”) and feared (“Piranha”). In the album’s lone thematic detour, “Getting Into Drugs”, Jones’ meathead teenage neighbor does just that, and burns down his house in the process. It’s pretty funny. Otherwise – and this is not to damn with faint praise – with Fire Music it’s another day at the Rock and Roll Office for one of the genre’s true believers.