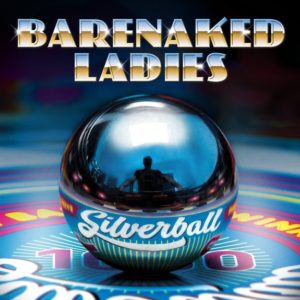 Silverball is the eleventh full-length original-material studio album by Barenaked Ladies. The album was released on June 2, 2015.[2] The album is the band’s third studio album since the departure of founding member Steven Page in February 2009. The album was recorded in late 2014 and early 2015 with producer Gavin Brown. “Matter of Time”, a song from the album, was a digital pre-release give-away to ticketbuyers of the band’s Last Summer On Earth 2015 tour.

The cover art for the album, which shares a name with one of its songs, apparently depicts a pinball sitting on a pinball table surface, reflecting the darkened figure of a man playing. Lead singer and guitarist Ed Robertson, an acknowledged longtime video game fanatic turned his interest towards pinball in the 2010s, amassing a collection of machines.

For a limited time, Best Buy offered a retailer-exclusive edition of the album in the United States including “Counting Down” and “Fall Back On”, two songs which were initially cut from the album.[3] Both songs are exclusive to Spotify in Canada, who also offer a track-by-track commentary by the band for the album.

The album was released on vinyl July 31, 2015. [4] BNL Rocks Red Rocks, a live album recorded at Red Rocks Amphitheatre during the tour for Silverball, was released May 20, 2016.