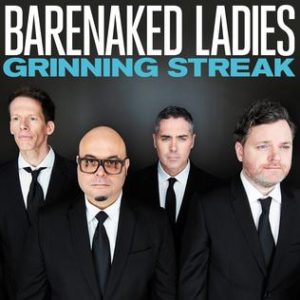 Grinning Streak is the tenth full-length original-material studio album by Barenaked Ladies (the ninth, if Barenaked Ladies Are Me and Are Men are considered as one double-album).[1] The album was released on June 4, 2013 on Vanguard Records. It is the band’s first album on Vanguard.[2] The album is the band’s second studio album since the departure of founding member Steven Page in February 2009. The album was recorded from February to April 2013 in separate sessions with Howie Beck, Gavin Brown, and possibly other producers (including Mark Endert and Greg Wells whose names were mentioned by the band as potentially working on the album). The first single, “Boomerang” was recorded in a separate session produced by Brown in May 2012, initially for release that summer.